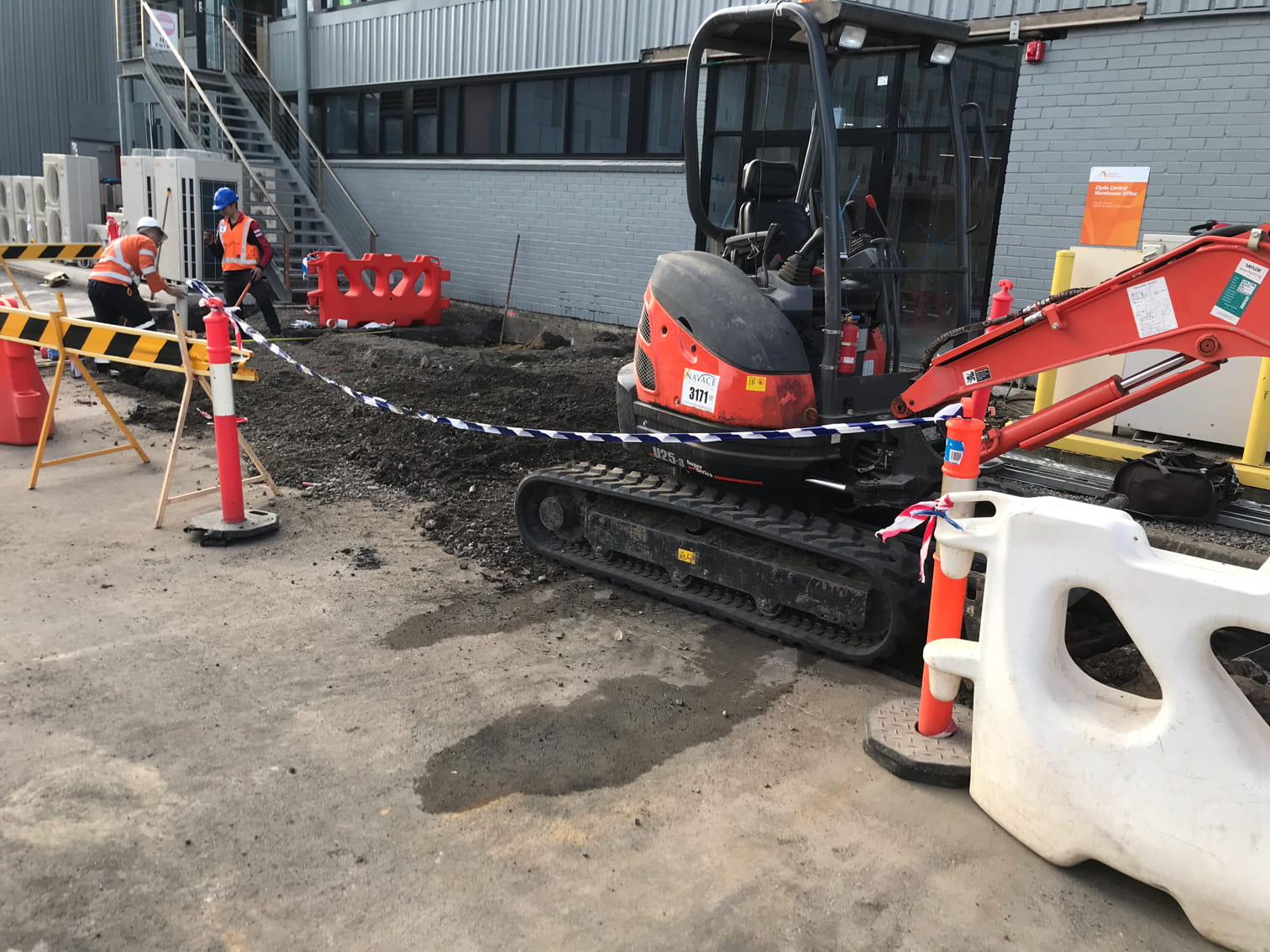 The Auburn Stabling Yard in Clyde is an impressive operation. We’re not sure of their motto but with kilometres of non-gazetted roads, scores of workshops and hundreds of workers it has to be something close to ours.

Relocated from Eveleigh in 2018, Clyde is the primary maintenance hub for the Sydney Trains fleet. Like all large infrastructure assets, demolition and reconstruction is always underway in some form or another.

So when Stephen Edwards sought out a rail-experienced demolition contractor to help convert an old warehouse, well, there really was no one else. We’re so glad they did, because there’s something extremely satisfying about entering a rail spec project.

Engineer Ondrej Krpalek made his way out to Clyde to see the warehouse, run a tape and eyeball any potential pitfalls. A disused former workshop was to end up as Sydney Trains new IT centre, meaning demolition works and rubbish removal to clear the way for new build. Here he met Joel Blanch, Stephen Edwards’ man of the moment. Joel would run the operation with Perfect workers reporting directly to him. With all the data he needed and everyone on the same page, Ondrej hightailed it back to Perfect HQ to set out a BoQ and quote, which was duly approved by Stephen Edwards. It was to be a six week staged project so Franky in Perfect Operations scheduled men and machines and we began the very next week.

As is often the case, Joel first directed the boys towards rubbish removal. Anything of value was remanded and palletised for Sydney Trains. Anything reusable was recycled to help keep waste at a minimum. General rubbish was loaded into skips and sent to Bingo Auburn. One advantage of the tip’s proximity is the reduction of emissions in rubbish transport. There was no hazmat present so the team moved onto the next phase: soft demolition.

The SoW called for almost a full interior strip out, so the lads broke out jimmy bars, impact drivers, sledgehammers, cutoff wheels and PPE. Internal linings were removed, old insulation was binned and after confirmation of termination – electrical wiring was recycled. Any framing that wasn’t to survive was removed and skip-binned. Disused air conditioning ducting was sent to SIMS and along with surplus metal shelving and one 2m tall electrical control unit. Internal glazing was carefully removed and sent away as were internal and external doors no longer required.

The design called for a handful of new, wider internal door openings. So with some propping and lintels we expanded the thoroughfares.

And then the fun began. Heavy demo.

Inside the workshop lay a 3m high brick enclosure with a steel flue venting to outside. It had to go. So with the 5t excavator and sledgehammers on standby the enclosure was brought down in a controlled collapse. The bricks were loaded out into a skip and sent to Concrete Recyclers in Camellia where they’ll end up as someone’s landscaping. Underneath the ex-enclosure the slab was cut and removed also to allow for the new design. A mechanical plinth was deemed surplus to needs, so it was broken up by the 5t and hydraulic breaker and loaded out as well.
This done, Joel led the team outside.

The team mounted our EWP and removed gutters & downpipes. These were sent to SIMS, as well as some ageing sheet metal cladding and steel framing. There was some external HVAC ducting that went with it. There were some old awnings that were part of our SoW that made their way to SIMS as well.

420m2 of asphalt was cut and removed along with 26m2 of concrete walkways. Another plinth was earmarked for removal, so with one slick move of the bucket the 5t had it out and in the rubble skip. Whilst on site we excavated the soil under the plinth. This was especially tricky as water services were present. Joel was on hand to spot and despite some hairy moments this went off without a hitch.

The last task was widening an external doorway and installing a steel lintel as reinforcing. The existing brickwork was propped, the doorway opened up and a new lintel grouted in. Two days later the props were removed.

Incident and accident free, Joel gave the all clear and the Perfect team demobilised back to Marrickville, ready for their next rail adventure.

We Got It Done.

PERFECT CONTRACTING is capable of carrying out project like Warehouse demolition – Auburn Stabling Yard with a quick turn around, give us a call today on (02) 8021 1784.