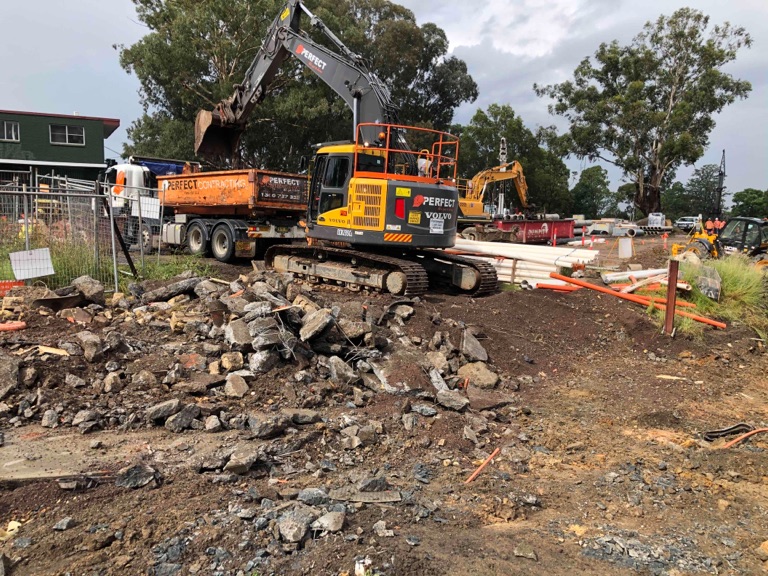 Vic ‘The Champ’ Aragona is one of Perfect’s most seasoned civil and demolition excavator operators. He’s forgotten more about digging holes than most of us will ever know. He’s also a boxing nut, so it’s not without life’s sense of humour that he was pitted against the Vineyard Creek rail bridge in an epic demolition showdown. Just one of hundreds of obstacles in the Parramatta Light Rail development, dismantling the span in favour of a wider, stronger unit was a non-negotiable item for the flagship project.

For context, the PLR is multi-billion dollar NSW Government initiative linking hospitals, universities and events between Westmead and Carlingford. Designed to unify the western hub with sleek rail transport, this 12km stretch of rail is expected to have 28 000 customers everyday by 2026. Except those customers would be bottlenecked at Vineyard Creek unless there was significant corridor widening on the cards.

One dark icy morning in June 2020 Perfect’s 36t machine was floated down Broadie Street, Rydalmere to the site’s lay-down yard. As is customary with The Champ, he was there an hour early, his hands sporting his trademark fingerless gloves against the cold. He greased and checked the machine in readiness for the inevitable CPB inspection – but once clear of that and the twin traditions of the PM pre-start & SWMS, Vic throttled up the 36 and tracked it over to the trembling structure. Following him in were a pair of Perfect 8 wheeler hooks, both carting 15m3 skips for waste – although one carried some necessary items including a fogging machine for dust suppression.

In the Red Corner

19m long, 3.5m wide and weighing in at 240 tonnes was the bridge. It consisted of reinforced concrete abutments at each bank spanned by 12 prestressed concrete girders, a central pier & a deck slab poured in situ.

In the Blue Corner

Was The Champ. Lifelong machine operator, doting grandfather, freight-train right cross and all round nice guy.

240 tonnes of bridge demo wasn’t going to be an easy victory for Vic. He knew that as well as anybody. But after forty years of demolition title fights under that heavyweight belt if this was to be a loss he would go down swinging. CPB had thrown Vic a bone by temporarily diverting the creek via spume temp pipe and already constructing the new bridge. This took away two important concerns: a] Vic’s reach and b] spoil blocking the creek’s flow. The third concern was an uncontrolled collapse. Truth be told, in demolition this is always a factor but in this case it was doubly so because of the sheer length of the girders. Wanting to protect their fighter at all costs, CPB backfilled under the bridge with 20mm gravel to zero this out.

With the site prepped, the breaker hitched up & warm, the fogger misting the air and the plan laid out, there was only one thing left to do: throw down. His aim? Break out the girders into skip sized lengths. After CPB confirmed there was no hazmat and all services were terminated, Vic laced up and stepped into the ring. Starting with the northernmost girder located farthest from the freshly landed skips, he placed the moil onto the beam and squeezed the button. The breaker punched one’s and two’s into the bridge for a good thirty seconds before Vic withdrew and inspected. It must have been some high MPA material because that combo merely glanced off.

The Champ ain’t The Champ for no reason, so, undeterred, he tried a different style – moving the moil more frequently with shorter bursts. Vic seemed to have a bit more luck this time and so he stayed in the pocket with this approach. As the bridge continued mechanical dismemberment the material began to back up. So Vic switched out the hammer for the mud bucket and began sorting material. With the excess concrete stockpiled nearby, Vic hitched up the ripper and prised out the first girder. Surprisingly it came easily, but excavation often does to The Champ. Having been knocked down before he didn’t celebrate too early. He dragged the girder closer to the first skip, and, using the mud bucket, expertly levered it inside, landing it with a boom. Two more like that and it was full. Hook truck driver Robertas threw a tarp over it and delivered it to Concrete Recyclers in Camellia.

And on the fight went: hammer, lever, drag and load until the girders had disappeared. With the threat of uncontrolled collapse now gone, the 20mm rock could be loaded out. Always concerned about environmental impact, CPB ensured it was utilised on another part of the greater PLR job.

The first few rounds of such a big fight are always a bit frantic before things settle down a few rounds in. Now coming into his own, Vic’s attention was on the northernmost abutment. The design called for it to be demolished to ground level as it was to be remain partially behind as part of a new causeway. The hammer made short work of the strengthened structure, Vic again loading out with the mud bucket. While at this stage, The Champ roughed in the civil works by battering around the remains to 45*.

With the northern abutment in his rearview Vic gave the centre pier the same treatment. There were some older footings present that he countered with some fancy footwork learned at the school of hard knocks. Soon the centre pier and southern abutment were demolished to ground level and the civil works roughed in.

With all heavy excavation complete and merely some detail work to go, Vic collected his attachments near the skips, hitched up the mud bucket and tracked into the ring for the last time. It’s important to know that as he did the float was en route to take the machine away. Its also to note that this machine does not have GPS – although on this day it had Vic. With those fingerless gloves expertly manoeuvring the sticks, Vic trimmed that creek within an inch of its life. Using every trick he had learned over four decades of excavation he finished those batters and floors within 7mm. The float driver arrived to the creek to find Vic casually leaning on the track, bucket resting on the ground and the job done.

In the space of just over a week, Vic had single handedly opened up a stretch of the PLR. Using decades of experience, a few slips and some slick jabs, Vic had delivered what Perfect had promised months earlier.

He Got It Won.

PERFECT CONTRACTING is capable of carrying out project like Parramatta Light Rail – Vineyard Creek Bridge with a quick turn around, give us a call today on (02) 8021 1784.