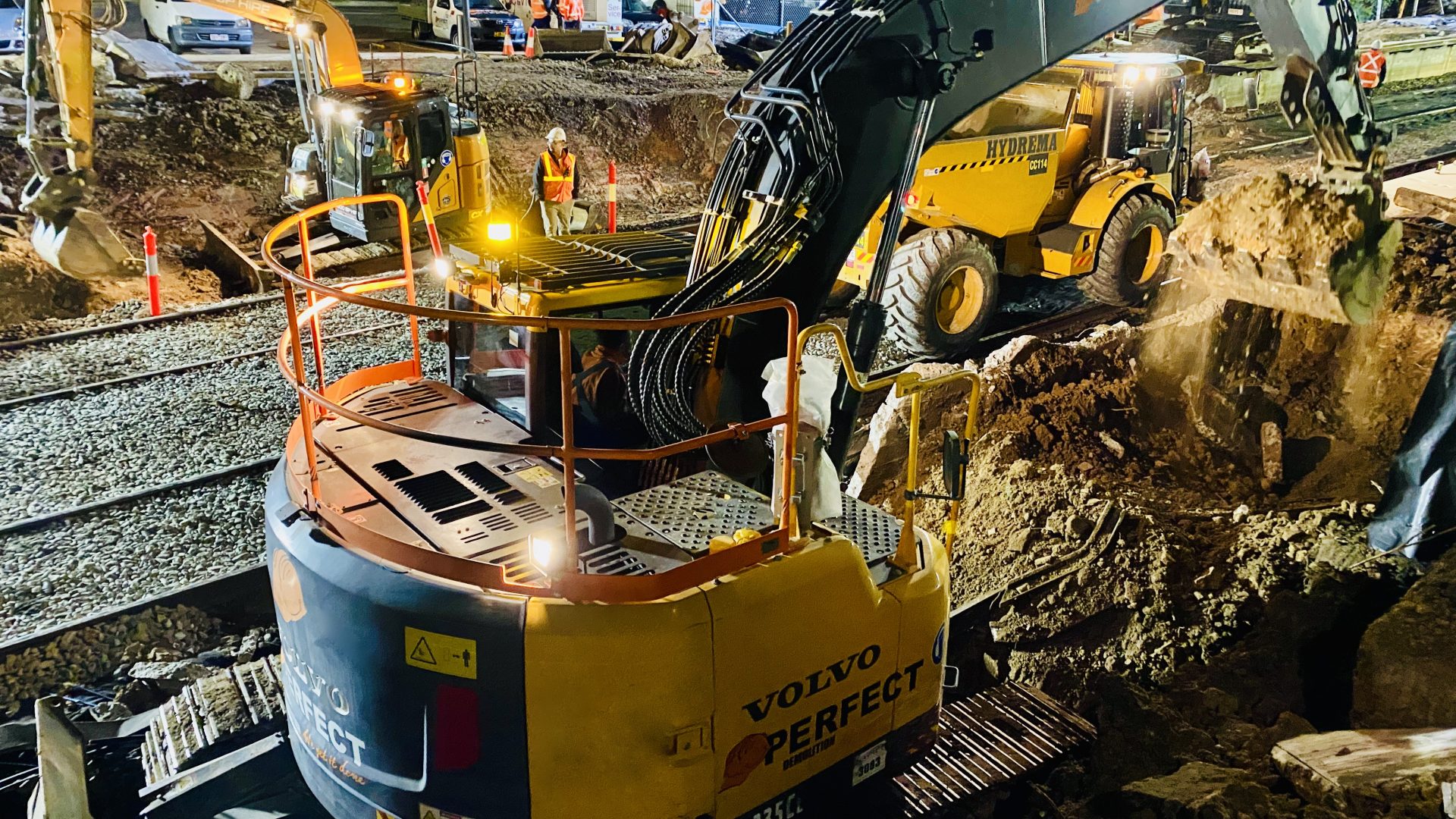 5000 metric tons is a lot of spoil to load out, let alone excavate. That’s 333 tippers, 157 quad dogs or 250 buckets from BMA’s Bucyrus 8750 dragline operating out of Peak Downs. The real mind-blowing part is that by the time our boots hit the ground we had less than a week to get it done.

The Sydney Metro is a gloriously expansive [yes, with an A] rail network designed to future-proof our great city against the next fifty years of population growth. Sharing the same gauge as the current trains means many existing stations will be upgraded, whilst others will be built from scratch. Wiley Park station is one of the former.

Located in the vibrant LGA of Canterbury-Bankstown, early in 2020 the station itself was determined to be a prime Metro candidate by TfNSW – with Downer contracted as the principal. And after bringing home the Ashes from Birrong and other challenging stations, in April of this year Perfect won the demo.

Knowing the sheer scale of demo & excavation and the original two week timeframe in which to do it, Project Manager Hisham Tarish, Perfect Group founder Matuesz Jedruszek and Senior Supervisor Puni Lio got to work immediately. Hisham would PM, Matuesz would run the days and Puni would run the nights.

Multiple site visits and co-ordination meetings ensured the adventurousness of the program was grounded in reality. Perfect would demo the street level station buildings on weekend possessions leading up to the main event followed by a two week shutdown for the excavation works. This included relocating residents in the immediate proximity to make way for round-the-clock high decibel hydraulic machine operation. Tim the Toolman Taylor would be proud. Perfect hierarchy knew the timeline would be tight but were confident we could get signed off within the fortnight. Until the bomb dropped.

A two week total shutdown of a stretch of the Liverpool line is a rare thing. Other necessary works that don’t often see the light of day start to creep in and time gets eroded very quickly. We must have done a cracking job on past TfNSW projects because the powers that be maintained complete faith in our ability to now complete these works in half the time. Let’s recap those numbers. 5000 tonnes. Demoed, excavated, loaded out, transported and stockpiled. In seven days. To this day he will maintain it was the brash Sydney winter that made his teeth chatter but there’s a fair chance this was the cause of Hisham quietly quivering.

But the Perfect slogan doesn’t say We Won’t Get It Done and so with the new timeline in place we ponied up and got to rescheduling and replanning. Before we knew it D-Day had arrived. Actually it was more D-Night.

2200 EST, Sunday 27th June, 2021. Wiley Park Station. Men and machines began to filter in. Yours truly floated in the 5.5t Kubota on the 8 wheeler hook. It was a sea of hi-vis orange and reflective silver crosses with the final machine tally standing at:

You could tell something big was afoot because of the intensity of the radio chatter. Hisham, Matuesz and Puni knew there was only one way to get this done in time: take no prisoners. And that’s exactly what they did. With countless meetings, revisions and plans there was only one thing left to do. Throttle down and send it. Safety was, is and always will be our number one priority but all the fluff and stitch was gone – there was work to be done.

The next few nights were a blur. A cold, foggy, 8 degree Wiley Park blur. I can only speak for the nights because that’s when I was present but at handover the day crew shared the same sentiment.

We had a cracking system though. On nights Dylan Matusewicz was chowing down on the city platform with 24t of Volvo’s finest. Jarek Pietraszko pummelled the country platform with the 15t Komatsu and then later on with the 8t Case. Mr. Smooth Andrea Jannelli detailed with the 5.5t Kubota and yours truly swung between a Kobelco 15t, two Volvo 14t’s and the big boy 35t. Many of the junior boys shuttled spoil along the 1km site in dry-hired Hydremas. They may have had the bumpiest ride in town but damn were they warm. Other lads were on hand swinging shovels and crow bars into that dark chocolate Sydney soil. Overseeing it all were Hisham, Matuesz and Puni. Bucket by bucket we consumed those platforms like they were warm meals on an 8 degree Sydney winter night.

There were a couple of surprises lurking in wait to destroy hard casing, teeth and cutting edges. Along the platform about every 2 metres was a buried length of disused rail line. It spanned from the coping edge across the entire width of the platform with a nice, fat mass-poured footing clinging to it like some giant steel and concrete lollipop. If you do the maths that’s 100 per platform. Try loading that into a Hydrema and tipping it. Two more blasts from the past were 1.8t solid concrete blocks – one buried under each platform and ONE HUNDRED TONNES of asbestos. The blocks had to be manoeuvred into skips using multiple machines – a credit to our operators. The sheer velocity of these blocks, even when loading the skip onto the truck meant to avoid utter carnage of the tailgate they had to be strapped in place just so they could be stockpiled. The ACM was removed under friable conditions by the Perfect friable asbestos team.

As the nights and days marched on we dug to height, froze in the fog and rain and then dug some more. We didn’t have a choice but to keep moving – Concrete was craning in pre-cast for the new platform, sometimes as little as 10 minutes behind us. Such was the workload one night Puni walked 40 000 steps.

It was a truly monolithic effort, and as the deadline neared we looked like we were actually going to make it! It’s important to note that we had nearly twenty machines operating at full noise in just an 800 sq. metre area for almost a hundred hours straight with no incidents. This doesn’t include the twenty other machines operated by other subbies.

At 0600 Friday morning as Perfect operators, dumper drivers and labourers shut their machines down and ambled wearily over to Puni’s ute, the big fella declared victory. Not only did We Get It Done, we actually got it done in 96 hours. If you do the sums that’s over 500 tonnes an hour. Demoed, dug, trimmed, loaded, transported, tipped and stockpiled.

There’s one reason we could achieve such a feat and it’s not because we have shiny new machines and state-of-the-art operating procedures. It’s our people. Perfect is the most personable company most of us have ever worked for. It is the most team-oriented, forward-facing, single-focus organisation we’ve ever encountered. It makes us proud to go to work. Coupling that with extraordinary leadership makes a seemingly insurmountable task within reach.

So Do We Get It Done? Damn straight we do. The new station at Wiley Park is a monument to that.

PERFECT CONTRACTING is capable of carrying out project like Demo & Excavation – Wiley Park Station with a quick turn around, give us a call today on (02) 8021 1784.