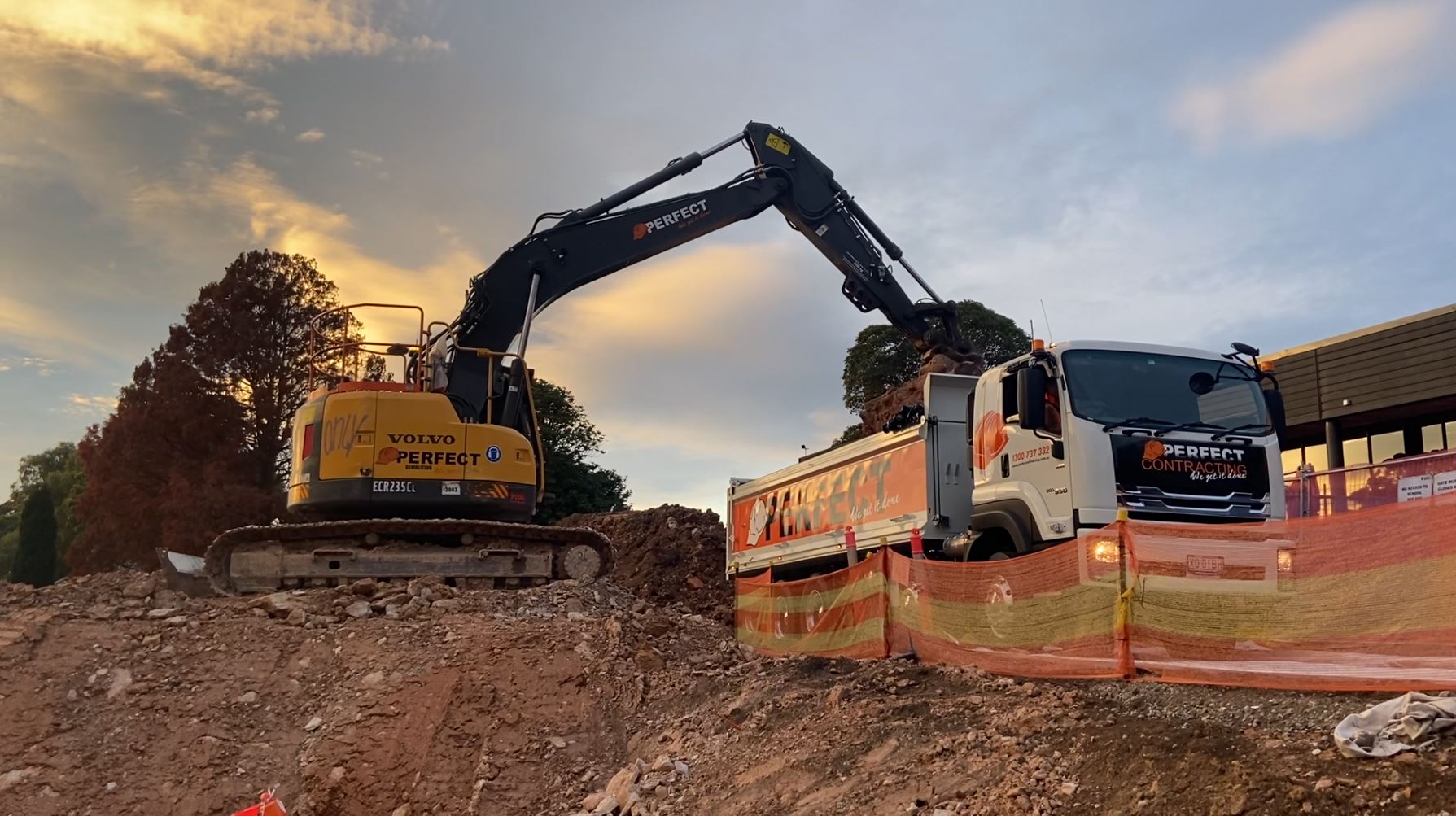 When Sydney builder FDC was conceived in 1990, their company foundations were built on the premise that the journey is just as important as the destination – that construction can and should be enjoyable. Perfect Contracting’s approach is much the same, so when we were awarded the demolition and civil works package at St. Joseph’s College in Hunter’s Hill early in 2021, it’s fair to say that both organisations were keen to get started.

First opened in 1881, this stalwart of Marist Brothers Catholic Boys Schooling has seen Hunter’s Hill grow from a bushranger refuge in the 1840s through a uranium refinery early in the 20th century to the beautiful tree-lined suburb it is today. The school itself has produced extraordinary sporting and entertainment talent [one test cricket legend, three Wallaby skippers, comedian Tom Gleeson and Blue Wiggle Tony Field] so it made sense that this year the ageing swimming pool was finally upgraded to an Olympic class facility.

Headed up by Mick and at FDC and Perfect’s superstar duo of project engineer Hisham Tarish & supervisor Sergio Rodrigues, the original tile and concrete affair was pulverised into raw rubble by a fleet of Perfect 20+ ton machines fitted with hydraulic breakers. Measuring an almost Olympic sized 30 x 25m and 2.7m at the deep end, the steel-reinforced 300mm floor and 250mmm walls did not come easy. But with a solid strategy by Sergio and senior operator Vic Aragona, the structure eventually fell victim to the relentless hammering. 4000 tonnes of masonry was turned to dust in just one week: hammered out, broken down and stockpiled to be trucked away. Erring on the side of safety and with Concrete Recyclers Camellia facility a short half-hour drive away, two Perfect 8-wheel hooks and our 10-wheeler tipper cycled out 190t a day until it was gone. The occasional backload of road base was returned for site roads and walkways. Perfect civil leading hand Gabe Conciatore was the man on point, ensuring every entering vehicle was escorted across school grounds for a total incident number of ZERO.

While all this noise filled the air, Perfect’s HAZMAT team completed the safe removal of 500 tonnes of asbestos-contaminated soil from the eastern end of the site. Headed up by Tim Lowery, Sam Tait and Younes Rais, the trio met all EPA guidelines to ensure the site was contaminant free. Perfect hooks carted the spoil away to Bingo’s Eastern Creek facility.

Now with nothing but a giant hole in the ground, some pretty suave architectural drawings and a team of civil works specialists, the focus shifted to construction. A garden variety Olympic swimming pool holds 2.5m litres of water, coming in at 2500 tonnes in weight. The sheer pressure called for a completely new design, one that would meet updated building codes and, fingers crossed, would see the school through several generations of Olympian swimming development.

The modifications needed a 750mm rock saw, wielded by the expert touch of senior operator Andrea Jannelli. With the saw and cradle freshly trucked in from one of our Vaucluse jobs, Mr Jannelli hitched it up to the 5t Kubota and began a series of surgical cuts to accommodate the new plumbing and electrical lines. The sandstone was collected and retained as school property for future use.

Alongside the hydraulic sawing, Mr Vic Aragona and Mr Tom McSweeney were ripping their way through thousands of tonnes of VENM and GSW to get close enough to the final design enough to trim. With large seams of sandstone running through virgin soil as well as unearthing previous excavation and construction, buckets and rippers were continually swapped out to ensure material segregation. And because space was at an absolute premium, stockpiles were more of a temporary feature than a reliable landmark. By the end of the job, those stockpiles were shifted approximately twenty times.

While we were busy undoing in minutes what mother nature had taken eons to create, piling began on the western end of the pool. Subcontractor Citilink Piling churned through sixty 600mm piles to a depth of 2.0m. One thing was certain – these foundations were going to be strong. Meanwhile back at the civil end, load out began with a fleet of subbed 10-wheeler tippers. The material was trucked as clean fill to construction sites across greater Sydney, our Perfect 10-wheeler getting in on the action. Inch by inch our machines tore at the earth, and truck by truck it was carted away. To get even close to the final height took 8 weeks, with Sergio keeping abreast of the fluctuating conditions so often brought about by civil works.

And then the lockdown hit.

The forced closure delayed the job for two full weeks. When things were eventually reopened, the site was lucky in that most of the work was big machine work. You couldn’t break a socially distanced rule if you tried. The additional steps for the site to remain open during the lockdown meant more time and further considerations on an already challenging job. But as we’ve done many times in the past, Perfect and FDC worked together towards the common goal of remaining buoyant and moving towards handover.

As the stockpiles shrunk and the noise of the 10 wheelers became less frequent, a survey made finer calculations and marks – all culminating in the start of the phase that all seasoned operators yearn for: the final trim. The substrate of sandstone with non-linear seams meant trimming would require patience, skill and forethought – three things that come naturally to Sergio and Vic. Floating out the 36t meant the 24t Volvo had room to manoeuvre, and, accompanied by the 5t Kubota manned by operator Ross Campbell, Vic made short work of the floor and achieved a 10mm variance of the final height across the entire pool. The spec only called for 20mm but Vic is.. well.. Vic. A small VENM ramp meant the machine could be tracked out of the five-metre deep hole, and with the ramp loaded out in one final day of 10-wheelers, the 24t Volvo was floated out along with the 5t Kubota.

Perfect is proud to have completed the civil works at St. Joseph’s College and hopes that in some small way our efforts help build the next generation of Olympians.

PERFECT CONTRACTING is capable of carrying out project like Demolition and civil works at St. Joseph’s College with a quick turn around, give us a call today on (02) 8021 1784.