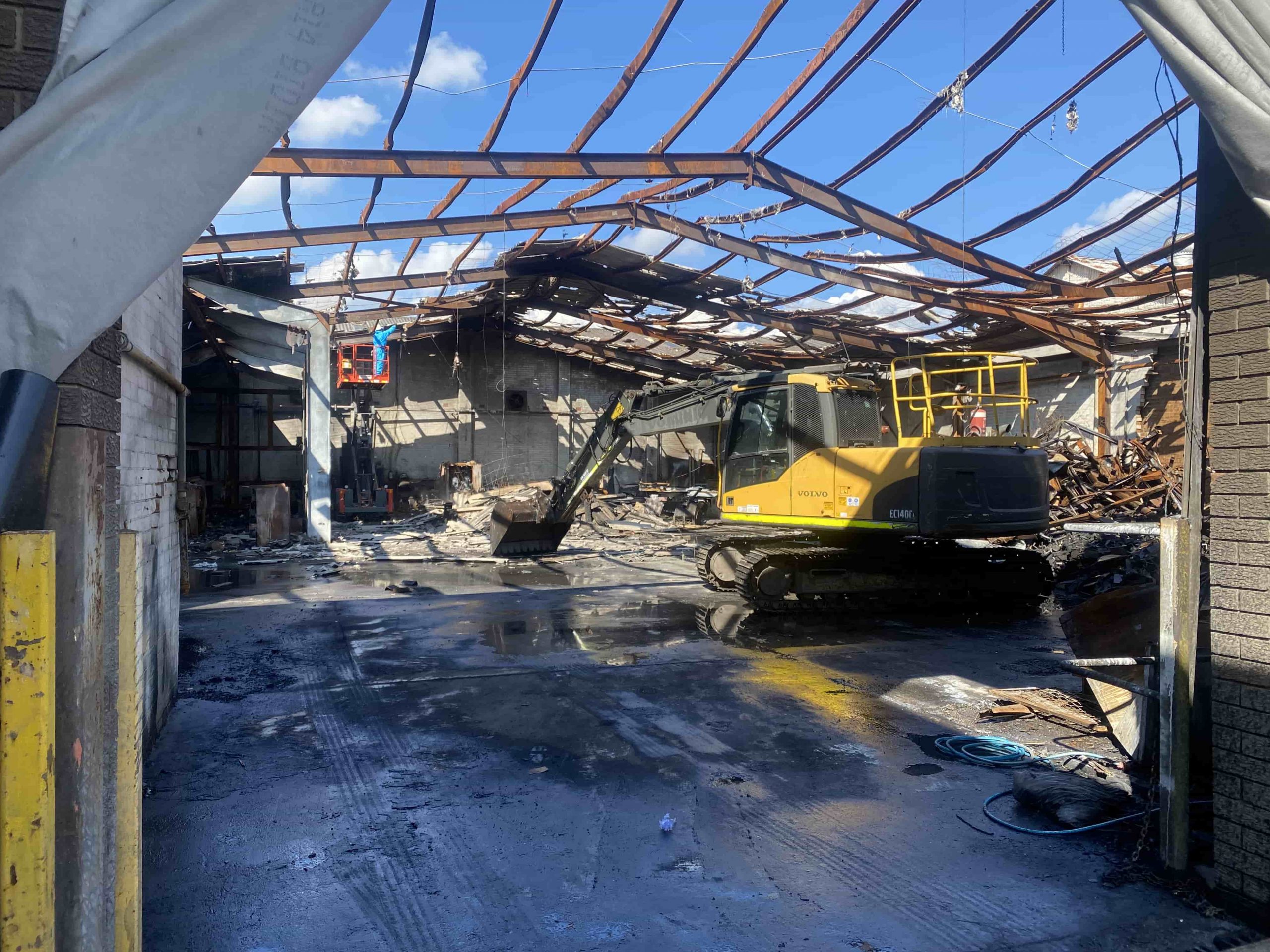 The wail of sirens shattered the clear morning air as eight NSW Fire and Rescue vehicles screamed down Canterbury road. Through the windscreen of the lead truck, only half a klick away, thick white smoke formed a perfect column against the deep blue sky. Leading Firefighter David Elliott craned his neck to try and see where in the sky the giant smoke shaft ended. It didn’t. Damn, this thing was huge. As the truck arrived outside the old warehouse David noticed a sheet of hard, wavy material on the ground nearby. He looked up at the structure and sighed. A Super Six roof. Whoever was going to clean this mess up would need to know exactly what they were doing.

This scene isn’t far from the truth. On the last day of October in 2020 Top Furniture’s Bankstown warehouse was destroyed in an intense industrial fire. Fuelled by flame hungry timber, the sheer heat not only incinerated the contents of the shed but did irreversible damage to the structure itself by buckling solid brick walls, burning ‘unburnable’ asbestos and twisting 10mm flanged I-Beams like they were papier mache. When the smoke cleared it was obvious there would be large scale Hazmat removal, structural demolition and remedial works.

As Sydney’s leading Hazmat removal and structural demolition company, Perfect was contracted to bring the site up to speed so it could be rebuilt. Our SoW consisted of:

With a challenging scope ahead and a tight deadline Perfect enlisted the help of the newly formed Specialised Hazmat Services, a trio of ex-Perfect Hazmat workers. Consisting of Tim Lowery, Sam Tait and Younes Rais, SHS were engaged to complete the site works under the Perfect umbrella. It was a smart move because Perfect has the equipment, the systems, the lineage & the leadership and SHS was motivated to prove themselves.

As the largest friable asbestos job we’d ever completed in terms of area and with four short weeks to Get It Done, the SHS/PC unit was mobilised. The first stage was to declare the site free and clear of all Hazmat. Perfect delivered the Decon unit which was quickly set up by Tim as Sam and Younes encapsulated the site. With the bubble inspected and approved by Tim, the trio of suited-up began the awkward and difficult task of removing the offending material. Perfect 8-wheeler hook trucks cycled 30m3 skips for days. These were lined, filled with contaminated material and tipped as per EPA regulations. With the bulkiest material disposed of, it was time for the finer clean up. This consisted of sucker trucks on loop. They’d come empty, vacuum up the contaminated sludge and then head out again. By the end of the first week, air monitoring declared the site safe and the SHS/PC alliance could move on to the heavy duty stuff: the roof structure and walls. The Decon unit was demobilised and the boys focused their attention forward.

A fire of this scale burns hot. Hot enough to topple solid brick walls. To set incombustible asbestos alight. To buckle 10mm flanged I-Beams. Dismantling beams of this size and weight is a challenge when they’re intact, but when they’ve been fire damaged and have bent out of shape they contain a ton of potential energy. Unbolting them, or even cutting them could result in that energy being released in an instant – which could clearly be very dangerous if you’re in its way. Additionally, the top courses of the surrounding brick walls needed to come down, but because the I-Beams were hard up against them, their removal could trigger an inadvertent wall collapse.

In demolition, uncontrolled movement is always the immediate threat. All movements need to be as controlled as possible – hence the need for engineering expertise.

With the cool judgement of Perfect Senior Estimating Engineer Kapelan ‘Kappa’ Kulendranathan, teamed with the site experience of Tim, Sam & Younes, the decision was made to crane the beams down. The plan was to rig a given beam with a Franna and from atop an EWP, slowly and gently oxy-cut it free. Kappa’s understanding of the behaviour of annealed steel gave him a solid hypothesis on their impending movement, but no one would be 100% sure until the first cut was made. With a multitude of outcomes planned for and all the controls in place, the beam was rigged and the cutting began. Sam and Tim would spot from the ground for wall & beam movement and Younes would cut. Safeguards were employed but its all theoretical when you’re the man on the torch.

However, the advantage of cutting 10mm thick material is that it takes time to get through, meaning Younes had a fair amount of warning on the way it wanted to behave. It performed as Kappa predicted and with the final cut it gently popped free. Now with all the potential energy unleashed, Younes got to cutting the other end. The first beam went off without a hitch, so the process was repeated for the entire roof structure. A few wayward bricks were loosened as the beams were dismantled but there was no uncontrolled collapse. Once all the steel was landed on the ground SHS got to cutting them up into manageable [skip sized] chunks so that they could be sent out for recycling.

With the roof structure razed and off site, the final stage was the induced collapse of the failing brick walls. Using a 14t excavator and a mud bucket [because of its long, flat cutting edge], courses of bricks were pulled into the warehouse. This required spotting from the ground to prevent bricks from falling into the cavity between buildings, but old hands circumvented that problem. It was an approach that was more checkers than chess but it was the safest way – ultimately there comes a point where you’ve just got to hook in. Soon the bricks were loaded out into Perfect skips and sent out for recycling to Concrete Recyclers in Camellia.

The City Rhythm job will go down in history. Not only was it Perfect’s largest friable removal job in terms of sheer area, but it was the birth of Specialised Hazmat Services. These two great organisations have a very warm future ahead of them. Not hot enough to buckle steel though.

PERFECT CONTRACTING is capable of carrying out project like Top Furniture’s warehouse – City Rhythm with a quick turn around, give us a call today on (02) 8021 1784.