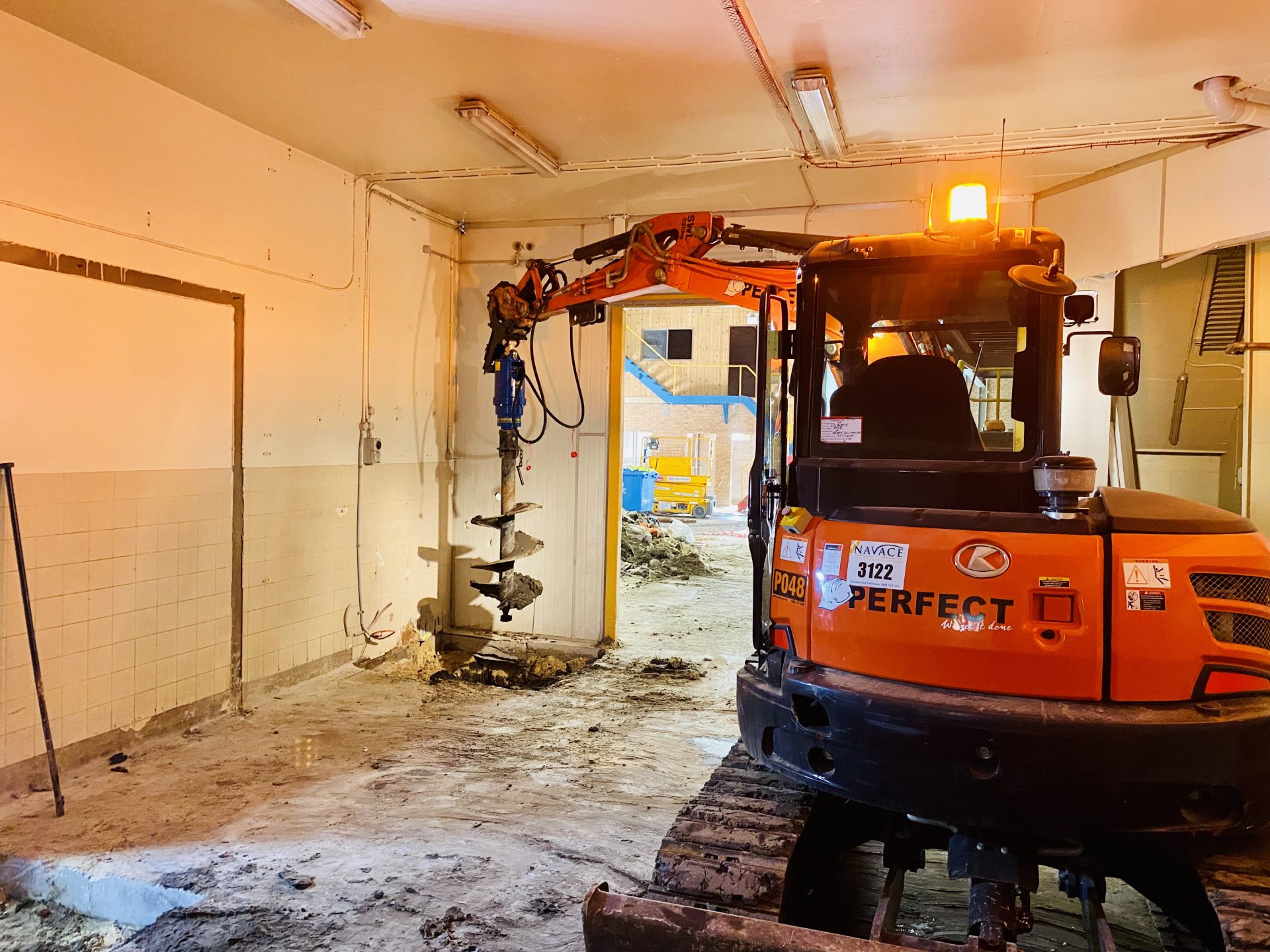 When specialist refurb builder Unita had to excavate six new footings for the vat storage area of Hawke’s Brewery’s new Marrickville operation, they turned to someone they knew they could rely on. Well, we certainly hope it’s someone they can rely on because it was our own Franky from Perfect Contracting’s Operations. Marrickville is to Perfect what Suncorp is to the Broncs, so early one cold July Monday a shiny Kubota 5 tonner was delivered to an inner west back street to help in the eventual brewing of fresh Australian ales.

Yours truly was on the sticks, so after a brief rundown from Unita’s site foreman Mick I hooked up the hydraulic breaker, collected my ripper & mud bucket and tracked into the small abandoned fish freezer. Such was the tightness of the access the rotating beacon cleared the doorway by only an inch. Once inside the wedge shaped freezer it wasn’t much bigger – even with the boom fully offset I could only slew 180 if the machine was hard up against one wall at the fat end of the room. With the breaker attached and the moil resting on the slab there was maybe 250mm from the top of the boom to the ceiling. Except that 250mm didn’t include the fresh waste pipe that had been installed just hours earlier, the twelve flouro lights or the conduit that fed them. In the planning stages Franky and Mick had discussed using a smaller machine but with the piers needing to be 2.5m deep and 600 wide, a smaller machine just wouldn’t have had the power nor the reach. The 5t would have to do but there was a caveat – before every task I would have to employ a bit of strategy lest I paint myself into a corner.

There being no time like the present I throttled up and hammered my way through the first four cuts, until a wayward leak saw a dash to Pirtek for a new hose. After this quick repair I loaded the spoil out to a Perfect 10m3 skip, topped it up from an existing stockpile and had it swapped over. Tight access meant this took most of the morning, especially considering removing the rubble from the room had to be done almost bucket by bucket. This done Mick and I tackled the last two cuts – he spotted, I operated. Within a short time the offending concrete was ripped up and removed. No incidents and no errors.

The next day saw the auger attached straight off the bat. The sheer length of it meant at full extension, with the dipper arm kissing the ceiling there was only 200mm freeplay from the tip to the dark chocolate earth spinning beneath it. Auguring really is a two man operation, one to spot and one to operate or it’s just too easy to drift and soon your hole is more less Sydney Centrepoint and more Leaning Tower of Pisa. Luckily, Perfect labourers Anthony and Sebastian were on hand with eye and shovel to make sure we got it right the first time. I’m not gonna lie, we did drift a little from time to time but corrections were made.

As we all know, digging in any kind of earth always yields gifts from the past and in this case it was bricks and footings. Whoever had built this place back in the day had gone overkill on the wall footings, some of which were as much as 600 wide that ran 600 deep before cutting back in! This affected the location of the piers so the engineer was called in. The decision was made to move the pier inwards until the edge of the auger kissed the footing and go down from there. Any GSW that remained up underneath the step would be crowbarred out so that the pier was tied in from top to bottom. That confirmed the auger was fired up and that deep brown earth was set free once again.

That didn’t stop the bricks though. During the original construction someone must have thought it was a good idea to dispose of the leftover bricks by stacking them neatly against the wall footings. Some of the stacks went down 1.8m! Every time the auger ran across one of these blasted things it would jam the screw against the existing footing. So out the auger would come, I’d clear the brick/s and spoil and back into the darkness it went – for another inch of progress until it found another brick. It was a great opportunity to learn patience!

In the mean time, Sebastian was hand excavating the two pits to find the mains. One was clear as day – a nice fat 50mm orange conduit. The second was nowhere to be seen so it was deemed to have circumnavigated the pit. Some of that soil was as hard as the concrete around it – Sebastian certainly earned smoko that day.

The delay in confirming the new location of the piers, the lack of room, the time-consuming load out and army of bricks saw us only fully pier two of the six holes and start on a third. It was after dark by the time I shut the machine down and it would be dark when I returned the next morning, except this time without labourers.

I started early the next morning. This day would be my last as the machine would be off-hired at 0600 the following day. Before all the other trades arrived at 0700 and needed power, Mick and I focused on cutting ground in the last two pits. The mains was off but naturally Mick wanted to keep the line intact. I hitched up the screw and hooked in. Hours and hours went by as the painstaking cycle continued: auger an inch, hit a brick, don’t hit the mains, pull the auger, clear the auger, put it back in, auger an inch, hit a brick, don’t hit the mains.. and so on. What was supposed to take an hour took four because of those damn bricks and lack of working room. But by smoko those two piers were 2.5m deep and with no more spotting to do Mick headed off to the other side of the job. I settled in for the afternoon’s task: completion of the last four piers including hand excavation of the spoil under the excessive wall footings, stockpiling/loading material outside and assembling the attachments for the float driver. I linked up the bluetooth, shut the cab door and went to work. Anyone passing by that old freezer that afternoon would hear a throttled up Kubota, a swiftly spinning auger and Metallica’s Black album at full noise.

At 6.15pm Mick returned to find the machine parked up & all attachments neatly stowed, a full 10m3 skip, an empty old fish freezer and six 2.5m deep piers. He actually laughed out loud, ‘I didn’t think you’d make it.’ I grinned, ‘Neither did I.’

Unita and Perfect. Job done. See you on the next one.

PERFECT CONTRACTING is capable of carrying out project like Footing Excavation – Hawke’s Brewery with a quick turn around, give us a call today on (02) 8021 1784.