It’s dark in here. Black rubber tracks slide quietly across the dusty cement floor before coming to a halt at the base of a huge concrete column. A hydraulic pump spools up as four outriggers touch down, lifting the machine off the deck. With perfect timing the boom swings around as the head swivels into action, the jackhammer moil coming to rest against the smooth grey pillar before it.

The silence is shattered as the jackhammer obliterates everything in its path. The century old pier turns to dust in mere seconds. What took months to build has been destroyed in the beat of a heart.

It sounds like something out of a sci-fi movie. A scene from a distant future where robotic automation has taken control.

Except the above scenario happened this morning. In Penrith.

Robotic demolition is pretty sexy but it isn’t exactly new. For instance, during WWII the German Army used miniature remote controlled tanks laden with explosives take out enemy fortifications. Since then the industry has advanced in leaps and bounds.

The sheer remoteness of the operator from the machine is the first distinct advantage. Not being in harm’s way is an uptick no one will deny. But what are some other pros to robotic demolition?

For the uninitiated, structural demo is the kind that alters or removes members that are crucial to the integrity of the building. Without them the building would collapse. So it’s a huge advantage to have your operator out of the crush zone whilst bringing down these members.

But building implosion isn’t the only risk we face. There’s the threat of longer term health hazards like exposure to carbon monoxide. Traditional demolition machines like small excavators or open-cab skid-steers don’t protect us from noxious exhaust fumes. Diesel exhaust is particularly harmful, with US states like California moving towards outlawing these engines completely. Demobots like Perfect’s fleet of Brokk isolates the machine from the power source by putting the generator outside, meaning those nasty exhaust gases are vented to the outside air.

Additionally there’s dust. Lungfuls of the stuff in any volume isn’t a wise health directive. And to make matters worse it appears silica dust is comparable to asbestos fibres. Luckily it’s only in a handful of places. Like dirt, stone, rock and concrete. Plasterboard. Cement board. Insulation. Tiles. Keeping your operator far away from this stuff is something you’ll both likely agree on.

The hydraulic breaker on a 20t excavator cycles between 300 and 700 blows per minute, whereas the breaker on the equivalent demolition robot, say a Brokk 500, is 600 – 1800 bpm. Three times as much! Demolition robots fight far above their weight in terms of the power of their attachments. This means that over the same time period the Brokk will arguably perform thrice the work the traditional digger will. Also, the operator will be less likely to run the thing at its maximum because of the extra power in reserve. Which means the machine won’t fatigue as fast and will give a longer service life.

Equally important is the compact nature of demobots. The business of demolishing buildings dictates that there is value in space saving machines. To get through doorways. Under beams. Up staircases. 1t and 1.7t excavators are pretty compact. But that small package comes at a price. Specifically hydraulic power – or a lack thereof. By comparison a 5t demobot packs the equivalent power to a 20t machine – except you can’t get a 20t machine half the places you can get a 5t. Imagine trying to squeeze a 20t excavator through a standard door!

Additionally, understanding the spatial awareness required to successfully operate a skid-steer or an excavator is a kinaesthetic experience. In fact it can take years of operational practice to call yourself an operator. Now we’re not saying that you can just don your hard hat and those columns and beams will tremble into submission. But what is apparent is that it takes less time to gain proficiency on a demobot than a traditional machine. Consequently this means less time learning the ropes and more time in the art of destruction.

As the operator of a fleet of Brokk demolition robots, Perfect Contracting is in a good position to observe trends in machine wet hire. Currently, Brokk hire is on the rise – in a big way. And for good reason. As safety standards evolve with each new day, construction and demolition in Australia will only demand more solutions like the ones offered by demobots. 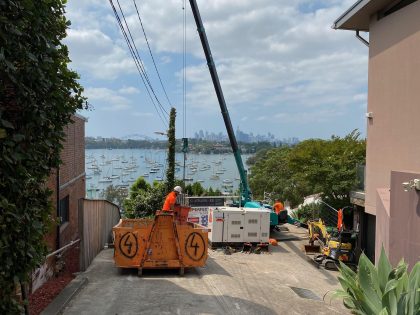 Demolition of a building at Arabella Street Longueville NSW 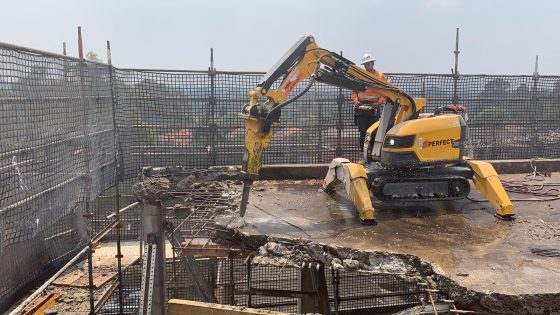 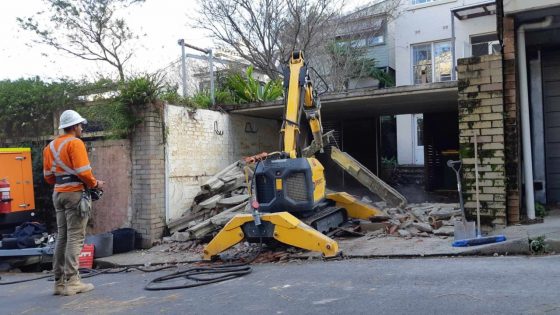